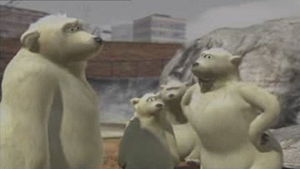 The Polar Bears. From left to right: Gary, Shane, Ian, and Claudia.

Polar Bears was a series of computer-animated shorts that were part of the second (and final) series of Lenny Henry In Pieces, a sketch comedy show starring Lenny Henry.[1] They aired in March 2003 on the United Kingdom's BBC One.

The series had a sitcom feel and revolved around a group of four polar bears who lived in a grimy and run-down concrete enclosure in Dudley Zoo in the West Midlands of England. The four characters were:

Seven episodes were made, scripted by Chris Reddy. Originally, there was some thought given to having Lenny Henry dress up for the sketches,[2] but he instead suggested they be animated. Henry's producer, Lucy Robinson, approached several animation studios, and chose to have the episodes directed by Pierre Coffin, working for Passion Pictures.

Alphabetically, the seven episodes were: