Pog (previously known as Guinea Pog) is a 3D artist who is in the furry fandom. Most of his work is of the 3D variety and ranges from video-games and movies to building and object visualization, little of it contains 'furry themes.' Pog has two character species 'Pog the guinea pig' and 'Pog the otter.' The two personalities vary a bit between each other, both are semi representative of his real world personality.

Pog is currently a student of Virginia Tech and is looking to graduate schools for his masters in 3D art. His hometowns currently are Blacksburg, VA and Marietta, GA. 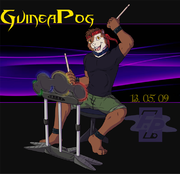 A rendition by Frosty Puppy
Pog the Otter 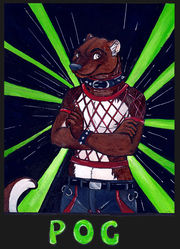