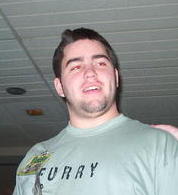 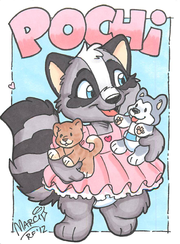 Pochi has been involved in the furry community since 2003. He was the founder of the Yahoo! group, Messy Furs.[citation needed]

Pochi's fursona is a two-year-old skunk/raccoon hybrid who often wears diapers and loves cuddling with plushies.

Pochi enjoys collecting and cuddling plushies. He loves to chat and learn on his computer, and also occasionally dabbles in coding and web design.

Pochi has many sexual paraphilias, such as scat, watersports, and vomit play and is also a plushophile.[citation needed]

On September 24, 2014, following a year-long investigation of a deep web site over the Tor network found to host illicit activities, Christopher Grief was arrested on child pornography charges at his parent's home by the U.S. Federal Bureau of Investigation (FBI)[1][6] in connection with the site, where activity dating as far back as 2012 was found to be tied to his IP address.[7]

In the official criminal complaint, written by a federal agent present at the search of the home, it was revealed that in addition to child pornography being found on his computer, he had also waived his Miranda rights, and admitted that the account and its activity were his.[7] He further admitted to a violent sexual interest in children, his activities on the website discussing the torturing of children and animals, and having made a video demonstrating the mutilation of a rat.[7]

Christopher was arraigned and charged in the United States District Court for the Eastern District of New York (EDNY) on the same day. After being assigned a public defender and waiving his right to a preliminary hearing, he was ordered to be held without bail, and to undergo a mental health evaluation[8][9]. He was remanded to the Metropolitan Detention Center ("MDC") in Brooklyn, New York at the end of 2014, and remained there through the conclusion of his trial.

On April 20, 2016, Brooklyn Federal Judge Pamela Chen threw out a lawsuit in which Grief had claimed that not being allowed to keep plush animals in his jail cell was a form of discrimination.[10] Grief had argued that he had a "strong spiritual connection with the spiritual essence of stuffed animals" which the warden at the Brooklyn MDC did not recognize since he kept rejecting Grief’s requests for two stuffed animals "for his religious practices."[10]

Grief was alleged to have told the FBI that he liked to have sex with stuffed animals; and, in throwing out Grief's lawsuit, Judge Chen noted that stuffed animals are considered "contraband" in prison, and because he does not belong to an actual religion, "the presence of stuffed animals is not a religious mandate."[10]

On January 24, 2018, Christopher was sentenced to eight years' imprisonment and lifetime supervised release and would be required to register as a sex offender and not be allowed unsupervised contact with minors.[12] He served out his sentence at the Federal Correctional Institution in Elkton, Ohio.

In 2019, Christopher filed a petition for a writ of habeas corpus against FCI Elkton's warden related to being denied certain materials and having others confiscated from him later.[13][14] This petition was dismissed.[15]