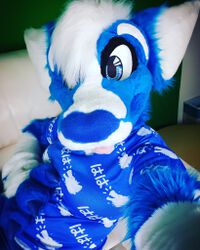 Pocari Roo is a fursuiter and YouTuber who lives in Brisbane, Australia.[1] Pocari has a wife named Kiba (KibaWolf), who she met by a chance encounter at RivFur when Kiba invited her to stay in her hotel room for the convention.

"Brush your suit!" from her YouTube series The Bottle.

"Break a sweat? Disinfect!!" from her YouTube series Q&A.

Pocari was a guest of honour for West Aussie Fur Frenzy 2018.[2]

Her main fursona is a Tazmanian Devil named Dezu, but she records videos on YouTube in fursuit as Pocari, a genderfluid blue Sodaroo, based off the Japanese sports drink Pocari Sweat.[1]

Pocari runs a YouTube channel which features mainly her in fursuit talking in vlogs and doing other things, including livestreams, opening fan mail, and convention videos. She has over 190,000 subscribers, making her one of the most popular furry YouTubers.