From WikiFur, the furry encyclopedia.
(Redirected from Pleasures of the Fur)
Jump to: navigation, search
Culture > Media coverage > Vanity Fair

Vanity Fair is an American based magazine, covering current culture, fashion, and politics events, and published by Condé Nast Publications since 1914. 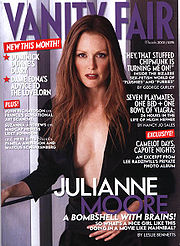 The magazine published on its March 2001 issue an article by George Gurley about the furry subculture entitled Pleasures of the Fur. It was generally regarded as a very unfavourable portrayal of the fandom.

This article, along with the appearance of furs in MTV's Sex2K, was the start of a cycle of negative appearances the furry subculture would make in the "mainstream" press.

The Vanity Fair coverage has been mentioned in subsequently in regards to furries. For example, in a 2004 interview the director John Waters is asked why he hasn't "addressed" furries. He replies "I haven't done that because Vanity Fair had that big article about it, and I never really believed it was true."[1]

Vanity Fair was also discussed in "Animal Passions", an article in the Pittsburgh City Paper about Anthrocon 2006.

In July 03, 2009 CNN's Anderson Cooper [2] joined on a report about Anthrocon. In the report they called the convention "Furry Fest" and told the viewers to google the Vanity Fair article to learn more about what is happening at the convention.