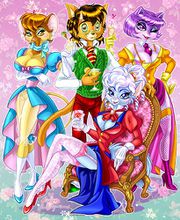 Pleasure Bon Bon was a subscription-based adult furry web comic created by Vanessa Santato, presented originally in Vixine and now its own site.

The strip is set in the town of Bon Bon, a remote mountain town with a thriving tourism economy, where prostitution and gambling are openly tolerated and/or encouraged.

A young Abyssinian cat, William Greenback, moves there to escape some serious debts and to look for a job. Unfortunately, a key reason for the financial distress is that he is a compulsive gambler and is unaware of the casinos in the town until it is too late.

Soon, having lost almost all his money at the tables, William purchases one last drink before going off to commit suicide, only to have fate intervene. Violet, a naive raccoon prostitute, runs into him and spills his drink, provoking him to demand a refund. Betty, the brothel's top woman, sees the incident and assumes that Violet has found a new client for her. However, William refuses Betty's advances in favor of his refund demand and starts a fight in frustration. The male cat is soon beaten and about to be thrown out when an associate tells Betty that he is looking for employment.

As a result, William wakes up in Betty's quarters and is presented with an employment opportunity. It turns out that Simon Blue, the richest man in Bon Bon, is looking for a butler to manage his household at a handsome wage of 5000 florins a month. The duties would include looking after his daughter, Mary, whom he keeps almost literally under lock and key on the estate to prevent her from being corrupted by the pervasive sexuality in the community. To that end, Simon is insistent on a homosexual employee to preclude him taking advantage of her. Betty and Violet propose that William pass as gay to get the job and William, while initially flummoxed at the job condition, agrees to the idea. He decides he can model his behavior after his good gay friend, Dorian Grain, who is much like a furry Oscar Wilde.

Unbeknownst to him, Mary Blue is a beautiful, albeit sexually frustrated cat, who desires a handsome lover - and to lose her virginity - more than anything else. As a result, the handsome and generally well-mannered William will face a tempting occupational hazard.

2016: Restoration and Reborn on Patreon[edit]

In 2016 Vanessa Santato decided to give a new birth to this comics starting a restoration of all issues published so far and continuing new issues on Patreon portal: https://www.patreon.com/VanessaSan This new way to access this comics allows to have a direct contact with Vanessa Santato and to download interesting work in progress and to have an insight of the long and scrupulous works that's behind one page.

After various disputes[1] between Vanessa Santato and the owner of PBB website, Vanessa Santato decided to stop working on this comic and create a reboot called Pleasure Bon Bon Next with a new style and supported only via her Patreon page[2]

After being a paid member for six months and being active on the forums, you can be put on a waiting list to have your character drawn by Miss Santato. You will get a custom avatar for use on the forums and your character can be used for slight roles in the comic. Avatar cameos can range from being a simple background character to having a couple pages dedicated to a sexual encounter, as the situation dictates.