Pit bull is a term used to describe several breeds of dogs with similar physical characteristics and lineage, including the American Pit Bull Terrier, Staffordshire Bull Terrier, American Bully, American Bulldog and the American Staffordshire Terrier. Pit bulls have even been confused for Labrador Retrievers (as well as the other way around) because both pit bulls and Labradors have similar large, square heads. Pit bulls are often a target of breed specific legislation, or legislation that wants to ban or limit ownership of any breed deemed dangerous. This is due to the dog's reputation for unprovoked assault, and origin for use dog fights and other blood sports such as bull-baiting. Despite this reputation, pit bulls have been successful pets, police dogs and therapy dogs. 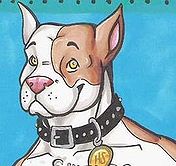