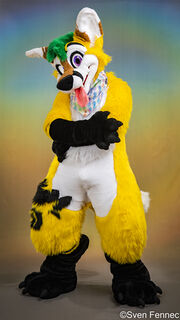 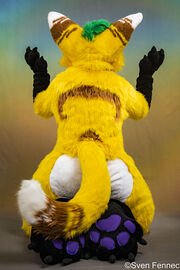 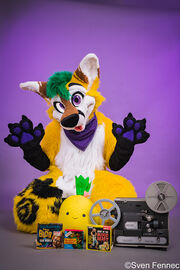 Pineapple Fox is a fursuiter and YouTuber from New Hampshire, USA.

The name pineapple came from a drink that was served in a ceramic cup at a restaurant that he would frequent. His coworkers started to call him pineapple and he decided to build a fursona off of the name.

Pineapple Fox announced that he would become a YouTuber in the Summer of 2019.[1] According to a tweet he sent on April 9, 2019, he was filming content for the channel with Kiwi Fox and Majira Strawberry.[2]

As with many furry YouTubers, Pineapple Fox has made various appearances on several other channels.

In addition to appearing on several videos, Pineapple Fox also frequents some of BetaEtaDelota's livestreams where he interacts with the viewers.

Pineapple Fox has a love for movies, especially ones from the 1950s to the 1980s. He loves to collect old 8mm Movies and Super 8 movies, as well as 8mm Projectors and Super 8 Projectors.

Pineapple has hosted movie panels at both PineFurCon 2019 and Anthro New England 2019, where he would talk about the technology and culture while showing movies on period tech.