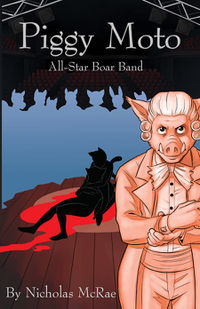 A band of pig musicians have entered an international competition with the hopes of changing the world's unflattering prejudices toward their species. An unknown opponent works behind the scenes, however, to sabotage the event. As pranks turn bloody, the swine find that more is at stake than a good reputation.

Author Nicholas McRae wrote the first draft of this novel in 2008. He began podcasting it, chapter by chapter, while seeking publication. The podcast stopped for a while, cut short by the coincidentally-named "Swine Flu" outbreak, and remained dormant for over a year before Podiobooks.com picked it up in 2011. In June of that same year, the novel was published by FurPlanet.

The novel is rated PG-13, for violence and some coarse language.

When asked if there was a sequel in the works, McRae had this to say: