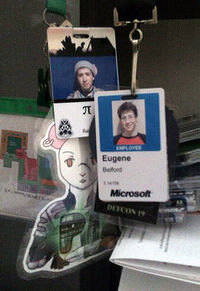 Pi is a moderator for the critic site Vivisector, and being a security professional, has often critiqued FurAffinity's coding, hardware infrastructure and security.[citation needed]

He operates Debian/GNU Lunix (and NetBSD on a few boxes, and often performs hacks with an actual Lisp machine, which turns parentheses into self-replicating backdoor Key generators.

He uses Xfce as his preferred window manager (evilwm on NetBSD boxes). Like many hackers, he wears black shirts with white text, and can speak to other hackers in binary.