A Reference Sheet of Phoenix

Photo of Phoenix in Fursuit 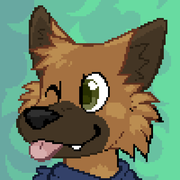 Phoenix Sheppy born March 27,[1] also known as (Phoenix, Phoenix Shepherd, or PhoenixSheppy), is a fursuiter, and IT Specialist who lives in St. Louis, Missouri, USA.

Phoenix's fursona is a German Shepherd, created by his original Kimi Cook (Kpcrox). Bearing realistic colors, its fur is tan and brown. The character has a feral and an anthro (bipedal) form. His fursona is considered a species-fluid or transformation sona, as he can switch from one species to another at will. Currently, he is a German Shepherd Dog. He considers his character to be a kidfur in terms of age.

His current artist Kotirikkin; has made several pieces for him, and has made his reference sheet pictured right. Starting as a simple contract job for a few stickers, Kotirikkin has has been Phoenix's go-to artist.

Phoenix created his fursona when he was 16, his family had never owned a dog before and his imagination had always wanted one in his life. So he decided that his fursona should reflect the dog he's always wanted. Today, Phoenix's fursona now represents himself more than the dog he always wanted, but deep down Phoenix will always be the dog he wanted in his childhood.

Phoenix has a "fursona career" as an emotional support dog, as that felt to be a more appropriate job for his fursona compared to a police or military dog. He occasionally wears a vest custom made for his fursuit that designates him as a service/support animal at conventions and events.

Phoenix owns a partial fursuit (Pictured Right), and has a 2.0 full-suit on the way. His current fursuit was designed by a fursuit designer on Etsy named Audrey Saldana.[2]

He was raised in Saint Louis, MO, but has moved around the Midwest a couple of times to cities like Chicago IL, and Nashville TN. He has several hobbies like homelabbing, playing Clone Hero, collecting and repairing Rock Band and Guitar Hero controllers, and programming.

Phoenix has attended the following conventions: