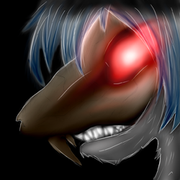 Phoenix Nabob is a veteran of Second Life. Know as a Master Builder for his work with micro prim work, he also was an accomplished modifier of Second Life avatars. He has taken on several forms over time changing his avatar to fit the current needs of his surroundings. Each form becomes a 'rebirth' of Phoenix Firewolf. He has on several occasions run Sims within Second Life, most notable being Serenity Woods (formerly known as The Forest), Flyin' Tails, and Phoenix Air (since renamed since the closing of the club by the same name closed).

Last seen he was wandering Second Life as a Demonic Manticore hybrid, having left his past as a Estate Manager for a less stressful life as just another furry on Second Life. He is a musician and has been known to play his guitar live from time to time. He was also a Disc Jockey under an alternative user name known as Featherhead Quartz. His DJ names are 'DJ Featherhead' and, when DJ with Phoenix Nabob, 'The Godfurther' with his focus mostly on 80's rock and hair metal.