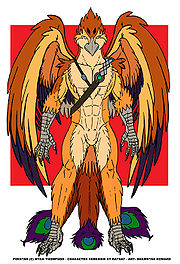 A phoenix is a mythical bird that continuously undergoes a cycle of rebirth throughout its life, its new body rising from the ashes of its predecessor upon each resurrection.

Most legends surrounding the phoenix originate in Greece, the Middle East (especially Egypt), and Asia. In Egypt, the bird was referred to as Bennu, while in Asia it is referred to either as Fenghuang or Zhuque (Chinese), or as Suzaku or Hō-ō (Japanese). There is also a Russian variant of the phoenix called Zhar-Ptitsa. In Greco-Roman traditions, the phoenix is usually a singular bird, while in Asian traditions, they usually comprise of a whole species reigning over all other birds.

Though there are some variations in appearance, phoenixes usually resemble peacocks, herons, roosters, birds of prey, or any combination thereof. The phoenix is almost always associated with fire, though in the furry and otherkin communities, other variants have surfaced with the ability to control ice or other elements in addition to, or instead of fire.

According to the Greco-Roman myth, at the end of its lifecycle, the phoenix erupts in flame and burns to ashes, from which a new young phoenix arises. As such, it is often regarded as a symbol of resurrection or of rebirth. In Asian mythology, it is more often associated with the energies of yin and yang, royalty (especially the Empress), and good luck.