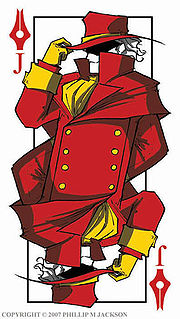 Phillip M. Jackson, also known as Jolly Jack and PMJ, is a classic media artist, video game concept artist, professional cartoonist and scandalous furry illustrator from the United Kingdom, and the creator of the webcomic Sequential Art. Jackson's indoctrination into the furry culture has been welcomed by ardent furries for quite a while, using Jackson's blatant furry style to judge him as one of the more silly yet talented and respectful furries on the internet.

Banjo-Kazooie - As a former employee of Rareware, he had done work with the game, most notably Nuts & Bolts. He was behind the designs for two notable characters in Nuts & Bolts, Lord Of Games (L.O.G.) and Piddles. His artwork is also featured as a background for Klungo Sssavesss The World and Klungo Sssavesss The Universsse. His gallery also features many concept art for events dropped from the game as well as earlier designs for L.O.G.