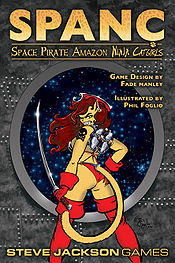 Foglio won two Hugo Awards for Best Fan Artist in 1977 and 1978. In the 1980s he wrote and illustrated a monthly comic entitled "What's New?" for Dragon Magazine from TSR Games, satirizing the world of role-playing games. This exposure gained him considerable fame within the gaming community.

Phil also drew the first known Unix daemons for a limited series of T-shirts in 1976. [1] Around the same time, he illustrated the MythAdventures series of fantasy novels by Robert Lynn Asprin.

In the early 1980s he formed an independent comic book company named ffantasy ffactory with SF artist/writer Freff and SF book editor Melissa Ann Singer. Working with editorial input from Chris Claremont, Phil and Freff wrote and drew a single issue of a science fiction/historical title called D'Arc Tangent before ending their collaboration in 1984. From there Phil went on to adapt the first volume of the MythAdventures series, Another Fine Myth into a comic book series from WaRP Graphics. This led to a variety of other work in the comics business, including comics from DC Comics, Marvel Comics, First Comics, and MU Press as well as his own work such as Buck Godot.