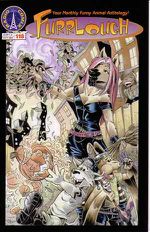 Phil Morrissey is a professional artist whose work has been printed by Radio Comix as well as Gallery and other venues. He is frequently seen at conventions and was the guest of honor at Furry Spring Break.

Phil is the creator of Stellar Babe, which was officially relaunched on January 11, 2017, with new material as a webcomic with longer stories as well as the usual shorts. The original one page strips will be integrated into the new incarnation's timeline for continuity purposes. This version has added inker Tim Bauer and Chris Harris doing colorwork to round out the crew.

He is also an honorary member of the Tucson Mob.