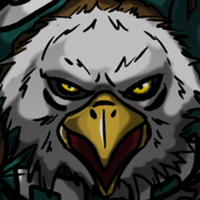 Phil Adler, also known as PheagleAdler, hg3300, or just hg (real name Harold George Wagner III, born 12 Jan 1990),[1] is a furry commissioner and fursuiter residing in Tamaqua, Pennsylvania, USA. He is a graduate of Pennsylvania State University, having majored in Telecommunications with a minor in Business.

Pheagle has been involved with the fandom since 2008, after discovering furry media on the image gallery Transfur.

He has has commissioned artists as early as 2010, most of it displayed on his deviantART and Fur Affinity accounts.

Pheagle's fursona is a bald eagle who is also member of the NFL's Philadelphia Eagles, an American pro football team.

Pheagle was created and first drawn in 2010 by Keanon Woods. The term "pheagle" was given by Keanon because he was a "Philadelphia Eagle", and the term stuck. He was finally given the name Philip Adler in late 2011 ("Adler" being German for "eagle" and "Philip" deriving from "Philadelphia").

Pheagle's fursuit was created by Roofur and was first debuted at Anthrocon 2015.