Phenix is a character in Extinctioners. Her first appearance was in Extinctioners Volume 2, Issue 1, in "Countdown to Extinction Part Two" (story and art by Shawntae Howard, inks by Malcolm Earle, lettering by Fender and Tom Ziolkowski). 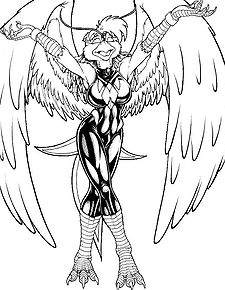 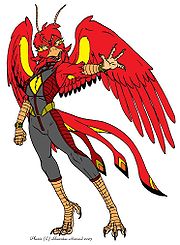 Phenix is the definition of a free spirit. As a phoenix, she has to potential to live a very long life (up to 500 years or more!), which means finding something that can grab her attention for any serious amount of time isn't the easiest thing to do. She became involved with her current team mates when she was attacked and captured by aliens bent on taking control of her current protectorate, Alden.

Upon being freed by Katherine Fela and Erica Starfox, she led a small band against the aliens and helped free their other captives. Now she's been adopted by her team as co-leader, which is a very new experience for her. She's never had responsibilities before, especially when her decisions can affect the lives of millions.

(As a past time, Phenix is a very successful fashion designer, which she does in the form of a female rabbit under the alias Phelica LaPlume). She is the leader of the entire Extinctioner crew, a position that she has to quickly learn to live with. She has several powers, including but not limited to various fire-based powers, telekinesis, multimorphing (ability to change her species at will) and dimensional warping. Such a huge array of abilities may seem to give her a bit of a 'god-mode' complex, but in reality her powers are only half of what an average phoenix is capable of.