Beagle was born in Manhattan, New York, on April 20, 1939, the son of Rebecca Soyer and Simon Beagle. He is also a talented guitarist and folk singer.

Some of of the many achievement awards garnered by Peter S. Beagle include the Locus Award, Grand Prix de l'Imaginaire, Inkpot Award, Hugo Award, Nebula Award, and World Fantasy Award for Life Achievement award, among others. 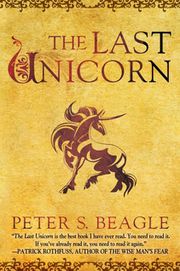 Peter S. Beagle's best-known work is The Last Unicorn (1968), a fantasy novel he wrote in his twenties, which Locus subscribers voted the number five "All-Time Best Fantasy Novel" in 1987.[citation needed] In 2005 he published a coda to The Last Unicorn, a novelette entitled Two Hearts, and began work on a full-novel sequel.[3]

The Pitt News on Peter S. Beagle and furry:

Beagle's career was dogged by exploitation and mismanagement going back to 1982's The Last Unicorn movie. Attempts to recover his rights collided with furry fandom. [9][10] In 2015, furry news reporter Patch O'Furr was named as party to a lawsuit by Beagle's then-manager Connor Cochran. Whistleblowers were accused of defamation for joining public claims about Cochran's history of fraud.

Patch sued Cochran back, and the action tripled when investors and Beagle sued Cochran too. Cochran responded by suing Beagle and his girlfriend, suing Beagle's lawyer, claiming authorship of Beagle's work, and supporting an attempt to take conservatorship of Beagle. Patch was supported by Beagle and persisted through winning thousands in sanctions during the battle, and seeing a judge call Cochran's actions "frivolous".[11] Cochran was dropped as a client by 5 lawyers until he represented himself and dropped his defamation claims; his other legal maneuvers failed and he went bankrupt.

In 2019 Patch was vindicated with a judgement of $32,000. Cochran was convicted of fraud and Beagle was awarded $332,000 in damages.[12] Fandom was key to supporting a creator against elder abuse; Kathleen Hunt, Peter's attorney, also took on the case pro bono when it became “increasingly clear that Beagle was being abused… Peter wanted his reputation and his life's work back.” In 2021, Beagle recovered his rights. [13][14]