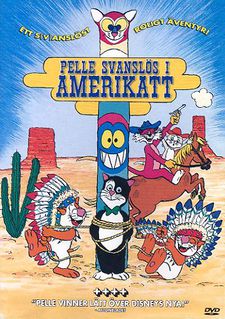 Peter-No-Tail in Americat (Swedish Pelle Svanslös i Amerikatt), is a 1985 Swedish animation based on the stories about the tail-less cat Pelle Svanslös by Gösta Knutsson. The cartoon is a sequel to the 1981 cartoon Peter-No-Tail, and is known in Sweden for its extremely surreal content.

Peter-No-Tail (Pelle Svanslös) is a cat who was born without a tail.[citation needed] He compensates this by studying hard and, much to the dismay of his arch-rival Magnus (Måns), he receives a fancy university degree very few cats in the university town Uppsala, Sweden have obtained. In the movie, he is visited by his American relative Pelle Swanson who invites him to visit his new home country America - in the movie called Americat. There everything is bigger; even the rats are much fatter.

The movie is mainly about what happens to someone from another country who is not used to the life in a big city. Nevertheless, Peter-No-Tail ís still a kind-hearted cat to everyone even if the other cats are not nice to him. Everything seems possible in America, even the prospect of finally having a proper tail and a sweetheart to call one's own.

The movie has many surreal elements, such as Peter encountering extremely large ghetto-rats who tries to eat him, encounters with an all cat mob, the famous church of Uppsala turns into a huge cat and a Native American cat who uses magic to give him a long, golden tail, earning him the nickname of "Peter Gold-Tail."