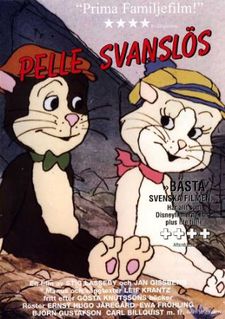 Peter-No-Tail (Swedish Pelle Svanslös), is a 1981 Swedish film about a cat who does not have a tail. He is born on a farm in the Swedish countryside, but the farm's owner is greedy and believes that more cats will cost too much money. He orders one of the workers to have Peter drowned, but the worker can't bring himself to do it. He puts Peter in the car of a family who rents a house close to the farm on the summer vacation. He is taken care of by the family, who is living in Uppsala. Without a tail, he becomes the talk of the town among the other cats, and especially Måns, who teases him cruelly. Måns' rough and silly courting of Molly Silk-Nose does not impress her, since she becomes interested in the kind and gentle Peter. But Måns won't give up that easy...

The film is animated and is based on the novel by Gösta Knutsson. Class discrimination, bullying and racism plays a big part of the story, much like in the books since Peter is at times looked down on for being a "country cat" who is accused by Måns of threatening the livelihoods of the town cats. In the original Swedish dub Måns is played by Ernst-Hugo Järegård.

A sequel is called Peter-No-Tail in Americat. In one part of the story, Peter has a dream in which Native American magic is used to give him a long, golden tail, earning him the nickname of "Peter Gold-Tail." By the end of that movie Peter saves Måns life, and in the end Måns becomes his friend.