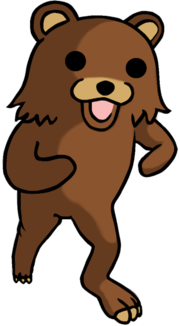 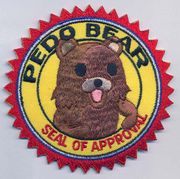 The "Pedobear Seal of Approval"

Pedobear is an anthropomorphic bear plush toy character and meme originating on 4chan. It is posted as a reply to posts that are pedophilic in nature, when a known or suspected pedophile is mentioned, or--particularly on deviantART--when a person is discovered to be underaged.

A number of companies make cheap costumes resembling Pedobear. This has led to the character making appearances at various conventions, especially those geared towards comics, cosplay, anime, furries, and similar fandoms. At Anthrocon 2009, Pedobear was seen handing out candy to passersby.[1]