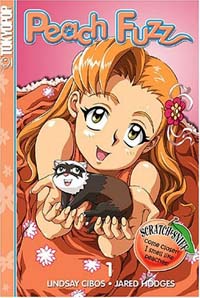 Peach Fuzz, is a Shōjo / comedy original English-language manga series made by Lindsay Cibos and Jared Hodges, and originally published in January 11, 2005 by TOKYOPOP. Peach Fuzz originally started as a short 17-page story in TOKYOPOP's 2nd Rising Stars of Manga competition, where it placed as Grand Prize. The series also appears in a Sunday comic-strip form within Sunday newspaper comics sections.

Peach Fuzz is about a 9-year old named Amanda Keller who buys a sassy ferret named Peach. The thrust of the story is that Peach believes that she's royalty and isn't impressed about being taken away from her subjects at the pet store. Life in the little girl's home is soon turned upside down by Her Ferret Highness Peach!

A ferret named Peach is abducted from the pet store by what she believes to be a ferocious, five-headed monster called Handra. In actuality, the "monster" is just a sweet and well-meaning girl called Amanda, who only wants to be loved. Peach ends up making a lot of trouble for her new owner due to different and humorous perspectives they have of each other, wherein princess Peach believes herself to have been kidnapped from her domain as a source of amusement for a tyrant and Amanda sees her new pet as simply a playful nonentity.

The series begins when Amanda wants a pet no one else has, so she chooses a ferret, because "they are cute when they play, so gentle while they sleep, and use a litter-box". Amanda chooses Peach at the local pet shop against her mother Megan's wishes that Amanda select something more easy to ignore. Amanda's mother reluctantly yields to her daughter's decision only after Amanda agrees her new pet should never injure her, and doing so will be enough reason to get rid of Peach. Amanda, terrified of losing her new pet and companion, keeps Peach's naughtiness a secret. Peach, in turn, rebels in a very self-congratulatory way, maintaining that she is an unloved, friendless princess who must heroically keep her composure and courage while being tormented by the hideous giants and their slaves.

Amanda Keller: an enthusiastic, ignorant, attention-starved young girl who has just recently entered into the fourth-grade. Her birthday falls just before the cut off date for school, making her younger than all the other students in the class. This isolates her from the rest of her classmates and makes her an easy target of two ruthless bullies. In her search for approval and praise from her peers, she comes upon the idea of getting a pet that will help her stand out from the rest of the class. Though the pet she chooses, a ferret named Peach, brings new joy into her life, it also brings with it new responsibilities for which she was unprepared. Amanda seems to think that Peach is a plaything-- a sentient plaything, but a plaything nonetheless. This head-in-the-clouds paradigm leads to one dangerous mishaps after another, possibly teaching Amanda a few lessons.

Peach: a princess of the Ferret Kingdom... at least, that's what she thinks. Kind words and preferential treatment from her mommy-ferret when she was young, combined with growing up as the only female ferret in the cage of ferrets at the pet store, has given Peach a vast egocentrism. As a result, Peach is a bit snobbish and bossy. She also has a violent side if pushed too far. One day she's abruptly thrown into a strange new land (Amanda's house) where she must learn to toughen up to gain control over the Handra (Amanda's hands) and ultimately achieve her goal of reestablishing her domain. Peach often superimposes her own imagination over the situations into which she is thrust: when confronted by Amanda's dolls, Peach believes herself to be a gladiator; she sees herself as a prisoner, eating tasteless food and licking water from the dungeon walls; she dramatizes the toy put into her cage as a slave-watchman. She is very much confused by Amanda's dealings, but is correct in supposing that the so-called Handra (a contraction of "hand" and "hydra"; see Lernaean Hydra) keeps her for its amusement alone.

Kim Chang: Amanda's best friend who is very popular among her classmates unlike Amanda. She is into fashion and trends and when Peach is a hit with their class she thinks of it as the new in thing and gets a ferret herself, named Pavaratty. She then helps Amanda make a ferret outfit to make her become popular but the plan backfires when the school bullies Phil and Tim use a note Amanda's mom wrote that allowed Amanda to wear the outfit, against Amanda, turning the whole school against her, including Kim.