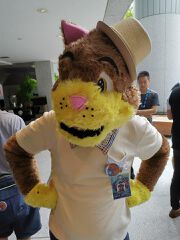 Patih Jantung, or just PJ (born April 4, 2000), is a fursuiter originally from Singapore.

In 2012, he discovered the furry fandom by watching furry art showcased on Youtube, joining the fandom on November 2017. He was a volunteer staff member for LIFC in 2019.

Patih's fursona, created in 2014, is a domestic cat covered with brown and yellow fur with eyes colored yellow (yellow means happiness and brown means chocolate). He wears glasses and has freckles. The concept for the character came from the animated tv show Tom & Jerry.

He made this fursuit in 2019. While fursuiting, he usually wears a browns signature fedora hat and a beige, brown, and blue bandana on his neck. Patih Jantung's hat was worn by Uncle Kage during a FURUM 2019 charity event.