Paprika is a comedy webcomic drawn and written by Nekonny.[1] The webcomic draws from Tina OnLine and serves as a prequel and sequel to Caribbean Blue. 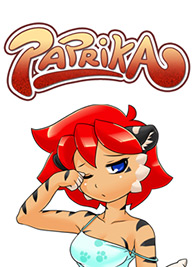 Tina’s alarm wakes her up at 6:00 am. Exhausted, Tina proceeds to smash the clock with a small hammer. Tina proceeds to eat breakfast, laughing at everyone else as they all slept in. Realizing that it’s Sunday, Tina goes back to bed. Megan, Tina’s mom, comes in to remind Tina that today is her anime convention. Unsuccessful verbally, Megan body slams onto Tina’s bed to wake her. After a quick breakfast, Tina heads out the door. While anxiously waiting for the bus, Tina reveals that she is in Sao Paulo, Brazil, in 1992.

Upon arriving at the anime convention a half hour early, Tina believes that she’ll be the first in line; however, Tina must wait two hours just to register. After registration, Yuki waves and yells to Tina to hurry up. With Snowmen surrounding her, Tina shouts free t-shirts to distract them and clear a path. Once together, Yuki scolds Tina for being late. Tina and Yuki quickly change into their cosplay of Ranma and Chun-Li respectively. Tina freaks out whenever she hears Ron announce that the contestants have to do an in-character skit as she did not prepare. Fortunately, Yuki terrifies Tina with a Ranma is afraid of cats reference. Yuki wins the competition.

Tina and Yuki explore the rest of the anime convention and promise to meet Ron, who must still perform his volunteer duties, at Paprika after the convention. While exploring the vast array of figurines, Tina comes across a miniature city and pretends to be Tinazilla. In her imaginary world, Tinazilla smashes several metropolitan buildings. Yuki retaliates with an aerial assault that fails miserable. Captured, Tinazilla is about to crush Yuki until ground reinforcements appear and fire at her. Realizing that they took their imagination a little too far, all the girls laugh before Ruby tells Tina to get down from her display. Ruby introduces herself and shows Tina and Yuki her war model and mecha displays. Ruby joins Tina and Yuki through their day of anime movies, video games, and artist alley before heading to Paprika, Tina’s family restaurant.

At Paprika, Kobe greets Tina, Ruby and Yuki with free ice cream sundaes. Ron arrives and joins the girls. Ruby painfully learns that Tina and Yuki are in fact nekomimis like her. Tina tries to compare the meeting of other nekomimis to the one time a kid found a super rare soccer sticker but fails at the symbolism. Ron announces his plan to start his own anime convention and invites the girls to join. Tina is super excited with the project and promises to help Ron fulfill his dream. Megan reminds Tina that she does have to work tomorrow though.

The next day, Yuki takes note of Tina’s overzealous joy as she readies herself for work. Megan is rather weary of this as she knows how Tina gets whenever she’s motivated and charges Yuki the task of keeping an eye on Tina. Tina nearly clobbers a Snowman for not receiving a bit tip. Yuki steps in and shows Tina how to properly earn a big tip with kindness. Ruby stops in and ask Tina for a recommendation. Tina suggests the Tiger Special, a legendary dish that requires martial art moves to prepare and can grant strength and enlightenment to anyone that can finish the whole dish. Ruby does her best to finish it but fails as it is quite spicy.

To date, no strips appear in Paprika that are related to Caribbean Blue’s sequel. 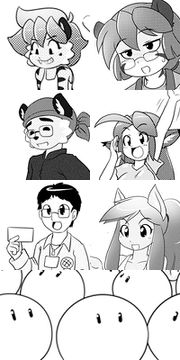 Tina is a tiger Nekomimi that lives with Megan and Kobe, her parents. Often considered lazy in the mornings, Tina shows great excitement when it comes to hanging out with Ron and Yuki, experiencing anything anime, and working for big tips. Tina’s excitement often causes her to overlook certain details and become irate whenever things don’t go according to her plan. Tina works as a waitress at Paprika, her family’s restaurant. Tina also appears in Caribbean Blue and Tina OnLine.

Megan is a tiger Nekomimi and Tina’s mother. Megan does tend to reign Tina in for her excitement and laziness in the mornings. Megan works as a cashier at Paprika, her family’s restaurant.

Kobe is a tiger Nekomimi and Tina’s father. Kobe is a cook that prepares all his delicacies with martial art skills. Kobe works as a cook at Paprika, his family’s restaurant.

Yuki is a domestic Nekomimi and Tina’s good friend. Yuki is more organized and punctual than Tina, which often results in her trying to save the day with her personal skills when it comes to winning the in-character cosplay skit and pleasing the customers. Yuki works with Tina at Paprika. Whenever made, Yuki’s front hair bang turns into a thunderbolt. Yuki also appears in Caribbean Blue and Tina OnLine.

Ron is a human and good friends with Tina and Yuki. Ron is a volunteer for a local anime convention. At Paprika, Ron meets with the Nekomimi women and announces his plan to start his own anime club. Ron also appears in Caribbean Blue and Tina OnLine.

The Snowmen are the miscellaneous background characters in Tora Tora Tokyo, Caribbean Blue, and Paprika. Here, they generally represent the background population in Brazil.