Pantera Atra-u is a fictional character created by HollyAnn in January 1990. 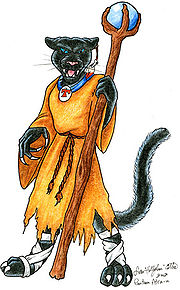 Pantera is an anthropomorphic black panther, originally created for Role-Playing Game purposes, but when her status became too "god-like", HollyAnn was discouraged to use Pantera as an RPG character.

These days, Pantera appears in furry art (both by HollyAnn and by other artists) and has made a brief appearance on Mountain Poutine and FurFire, as well as had stories written about her.

Pantera is easily recognizable by her simple attire, carrying a wooden staff with a glass orb at the top of it, and is often shown bearing a snarly expression.