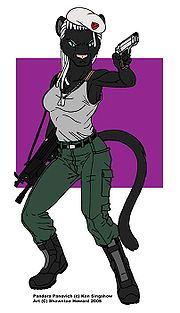 Pandora Panovich is a character in the comic book series Andorozon created by Ken Singshow but was also featured in Extinctioners comic series created by Shawntae Howard.

A Black Panther anthroid, Pandora Panovich is the militaristic sister of the E.C.S. She is in charge of the troops as an Ultra Commander. She is a trained soldier, skilled fighter pilot and a master of many martial arts. She is often the only one who takes her duties seriously, and while she likes Zora as her sister, she is often resentful by the way Tonya and Zora act. She feels that her sisters do not take their duties as seriously as they should and that they are entrusted with a great task from their mother, Dr. Van Burden. She dislikes that Zora lives a lavish and extravagant life style and that Tonya is too "soft". She also feels that Tonya could be the vulnerability for the organization and believes they should focus on their militaristic mission instead of nurturing a family bond.

To Pandora, Chekari 2 is just an annoying brat and avoids him whenever she can. Pandora has no future goals after the Andorozon are destroyed and would be quite happy to continue being in service of her mother and continuing the goal of dominating the world.