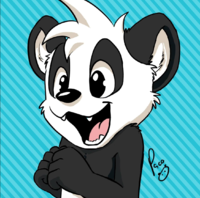 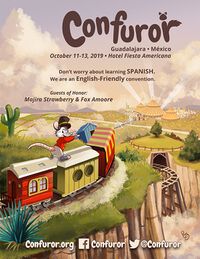 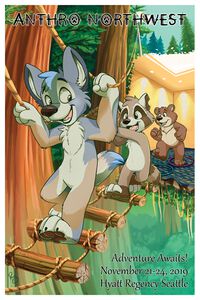 Paco was a Guest of Honor at Megaplex 2018 with Kyle McCarthy (NIIC the Singing Dog), helping the charity with a Livestream event and donating several traditional paintings, which were auctioned. He is also one of the promoters of Confuror, and has created poster and website art for it.

Paco's fursona is a giant panda.

Paco made his own fursuit of his character Parinton Panda in 2011.[3][4] He's no longer creating fursuits, since he's completely concentrated on making art. He's persistent in embodying his character during his performance.

Paco is best known for his art. His style resembles children's book illustrations, with scenes that are characteristically colorful and cheerful.

Paco writes and draws Art & Biro, a webcomic originally in Spanish that has been translated into English, Ukrainian, Portuguese, German, Italian and French "about the friendship between a Raccoon and a Fox".[5]