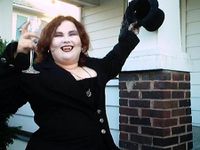 Auntie Pan Pan in her vampire and goth garb 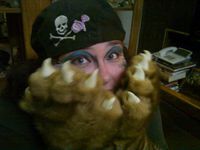 Pan Pan started going to furry conventions and events in 1993, starting with ConFurence 4. A writer and improv master by trade, she loved the environment of the Cabaret and became a performer. This lead to Pan Pan becoming Califur Theatrical staff and (finally) Lead.

Pan Pan's fursona is a gothic vampire red panda. This is due to her cross-fandom involvement and carries parts of each of her favored sub cultures. She decided on a red panda because of their dramatic markings, something that very much spoke to her as a fan of goth and vampire fandoms. Pan Pan is usually shown in gothic or vampire attire.

Pan Pan has been a part of many sub cultures, and calls many of them home. She became friends with Raven Tremblay via the Goth and Vampire fandoms. Pan Pan in turn dragged Raven to his first furry convention, since she needed some help with music for the con. She has been a part of the California Renaissance Faire community for over 25 years,[when?] and attends the Renaissance Faire yearly to play. Pan Pan loves the arts, and can be found exploring the different Orange County art walks.

As a fiber artist, Pan Pan enjoys spinning wool, knitting, and needle felting in her spare time. She is also well known for her tarot and tea leaf readings. She attends many conventions and can even be seen as a browncoat on occasion. She plays the ukelele and sings at many open mike nights in the Orange County area. She considers herself a Bohemian goth.