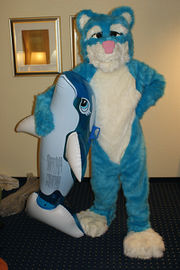 Pamperchu is also a ABDL. He is known for having an obsession with Pokemon and diapers, and tinkering with electronics and bitcoin mining.

Pamperchu started his furry Youtube channel in February 2008. He has made numerous videos on his involvement with the furry fandom including the creation of his fursuit as well as anything else furry related. He is also friends with other members of the fandom including Mousepaws and Evil Sibe.

Pamperchu is best known for being featured on G4's Attack of the Show. In the scene shown, he was wearing a bunny suit that he owns. He later stated that it was him in the scene.[citation needed]

Pamperchu owns a fursuit that he made himself. It is a blue wolf by the name of Sandy Wolf. Pamperchu has worn it on occasion including several conventions starting with Rainfurrest 2009.[2] Despite creating the fursuit, Pamperchu doesn't represent himself as Sandy Wolf in the fandom. Instead, he is represented by his pokesona who happens to be a Pikachu.