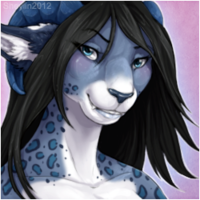 Sein owns two fursuits of his snowleopard/goat character. It was designed with reference art commissioned from Moondelle, and both suits were constructed by Koshka Fursuits.