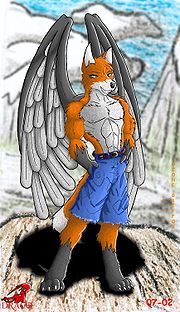 Ozone studies colors and the brain's interpretation of them as a hobby. He has been a colorist to other artists' works and makes coloring tutorials. He enjoys playing Chess, Othello, or any other strategy games.

Ozone is mainly interested in furry art, social exchanges, and roleplaying. He was the founder of FranFurence.[citation needed]

Ozone's fursona is a Griffox, an eagle/fox hybrid. While he resembles, at a glance, a fox with wings, it has several less visible avian features.

Born as a werewolf of Gaia in 1978, he grew up like a normal homide, rejected by human's society until his first transformation. Two years with the werewolves taught him to dislike those creatures, and he looked for ways to escape his curse. In 1999, he found a demon who accepted to replace his curse for another one. He then became a full shapeshifter thanks to a strange golden amulet offered by the demon. He adapted his shape through time to adopt more or less permanently the one of a Griffox.

Ozone's entire anatomy is naturally adapted to flying. Fully feathered like a bird's, the wings have a very flexible skeletal structure. His wings have superhuman strength and can create enough lift to enable him to carry aloft at least 500 pounds (226.8 kilos) in addition to his own weight. He flies by flapping his wings, as a bird does. Though he generally flies below the height of 6,500 feet (1.98 kilometers), Ozone can reach a height of 10,000 feet (3 kilometers) with little effort.

With severe strain he can reach the highest recorded altitude of a bird in flight (the African geese at 29,000 feet [8,8 kilometers] above sea level), but he can only remain that high for several minutes. He can fly nonstop under his own power for an approximate maximum of twelve hours.

The fur around his shoulder blades is in fact very thin black feather covering the wing arms. The wing's pits are protected by numerous grey feathers while the longest white ones can be up to four feet long and provides the main flight support. Cartilage bones are hollow like a bird's, making him weigh far less than usual for a fox of his build.

His body is virtually devoid of fat, and possesses greater proportionate muscle mass than an ordinary fox does, a larger neck and a stronger chest.Organs are protected in a large rib cage. His very thin tummy almost devoid of anything thus looking atrophied. His tail is flat and triangular, used like a rudder for his flight.

Eyes are specially adapted to withstand high-speed winds which would hurt the average fox eye. They are extremely sharp and are able to see the smallest of prey from afar. His ears are as large as a Fennec's and can twist backward to make his head perfectly aerodynamic and protect his auditory canal from the wind.

He possesses a special membrane in his respiratory system enabling him to extract oxygen from the air at high velocities or altitudes. His brain is smaller than a fox and he forgets things easily after a few minutes. He's also playful and silly, considering anybody a potential prey until proven otherwise.