First use of the furry version of "OwO" online 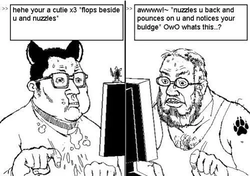 OwO, also stylized as owo, as a furry term, is a chat emoticon and meme used in furry text-based conversation and roleplay, normally with a sexual connotation, sometimes as a trolling term.[1] The two Os represent wide and open eyes, and the w represents a cutesy anime-styled mouth.

An alternate to this term is the UwU emoticon, borrowed from kaomoji, a type of Japanese emoticon which incorporates special characters used in Japanese writing. Kaomoji is considered kawaii, or "cute”, and often draw on anime and manga. UwU is a simplified form of the kaomoji emoticon, “(o･ω･o)”.[2] This emoticon is also used as a more passive one, using closed eyes instead of open ones.

The earliest known furry use of the emoticon was on January 6, 2013, on DeviantArt by user CookiMuffinFaic. It received over 130 views, 3 comments, and 3 downloads in about 3 and a half years.

On June 24, 2015, MinotaurusPro uploaded a parody comic of two grotesque furry fans sexually roleplaying to Imgur. One of the two characters shown comments in response to a message he received with:

The post garnered a positive response and gained attention within the furry fandom.

Memes mimicking the original post followed soon after,[citation needed] with content such as recreations of the origin, and puns involving UwU and OwO emoticons. A video by Seelmaru was uploaded in 2019 featuring a song based off of a spinoff from the meme's origin.