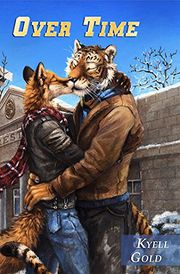 Over Time book over

Over Time is an anthropomorphic novel written by Kyell Gold and fifth and final book in the "Out of Position" series of novels. The cover art and interior illustrations are by Kenket and Rukis, and it was published by Sofawolf Press on January 14, 2016.

Picking up where Uncovered left off, Dev and Lee have makeup sex in Hal’s apartment. Afterwards, they head back to Dev’s apartment. Lee tells Dev everything about Eileen leaving Families United and his brother, Gregory being a part of the court case against Families United, to which Dev gets mad over. Lee gets an email from Brian saying he will leave him alone and a call from a liaison named Elmsley telling him to call him back soon. The boys agree to go out to talk about their future together. Dev tells Lee that he fired Ogleby, and Lee tells him about looking up Fisher’s agent as well as the fact that Fisher has been using drugs to speed up his recovery from his concussions. The boys head to Fisher’s house, where Dev tries to reason out with him after he hits his son Bradley. The conversation escalates and Fisher asks Dev to leave. Lee volunteers to help Gena around the house for the next few days. Lee talks to his father about Fisher’s problem and what he can do to fix it. Dev officially fires Ogleby in favor of Fisher’s agent, Damian. Later, the boys meet Hal for lunch, where he again asks about Fishers injuries. Dev meets Charm and Zillo to clear his mind, where they talk about where they might end up for next season. After Dev gets home, his parents call to tell him that Alexi, Gregory’s son, is having serious seizures and needs money for the hospital expenses. Dev tells them only if Gregory talks to him directly. Lee goes to Fisher’s house to help Gena. Fisher again becomes aggravated but calms down once Dev arrives. When the two talk, Dev storms out in anger. When the boys return home, Dev tells Lee that Fisher has been using feral animal hormones along with the steroids to keep himself playing football, which is highly illegal. Damian calls Dev and agrees to meet them at Fisher’s house the next day. The boys prepare for their trip to Yerba; Dev asks Polecki if he wanted to meet up. Later, Dev and Lee meet Damian, right as he sends Fisher’s retirement letter to the Firebirds. Damian talks to Dev about the future of his career before Fisher tells them to leave. Dev talks with Lee about possibly doing outreach spots now that the season’s over.

Dev and Lee travel to Yerba to look at possible homes for Lee once he starts his new job. When they head to the club that Dev visited in Divisions, they see a fox Dev recognizes as Ty kissing a wolf, who introduces himself to them as Arch. Ty reveals that he met Arch during the last trip to the club as a friend, that slowly grew into a friend with benefits situation and has been meeting him for sex ever since. Dev is initially upset that Ty kept his gay relationship a secret but is eventually okay with it. The next morning, Dev finds out Gregory released a statement over the settlement of the Families United court case. Assuming the statement is another personal shot at Dev, Dev calls his brother and asks him to meet face to face. Lee meets his with his co workers over lunch to sign paperwork, during which, Lee realizes that they know about Dev switching agents. Emmanuel and Jocko tell him to buy a house if he's looking to live in Yerba. Polecki invites Dev and Lee to a private wine tasting party to meet his boyfriend, Jay Cornwall. During the party, Zillo calls Dev to tell him Angela kicked Gerrard out of her home because he was raising a secret family. Shocked, Dev agrees to talk to him later. Dev and Polecki also discuss possibly going to Forrester University for a gay rights spot. The next day, the boys meet with Ty again before they head back home, where Ty asks for advice about being in bed with Arch.

When the boys return home, Damian reminds them about Fisher’s official retirement. They go to his house to lure Fisher out of his den, but right as the others leave, Dev hears a gunshot and Lee finds Fisher unconscious. Lee calls for an ambulance. Gena and her kids along with the boys head to the hospital with Fisher, who's miraculously alive. Damian reveals that Fisher signed the retirement papers prior. After initial surgery, the nurses tell Gena that Fisher will be okay but will have his jaw wired shut for the time being. The next day, the boys meet up with Hal and his girlfriend Pol, a coyote. Hal questions about Fisher being absent for his own retirement statement. Dev and Lee decide not to tell him what happened. Later when the boys meet Brenly for dinner, Brenly talks about how he found out Gerard was cheating on Angela. Lee suggests talking with Eileen before Dev heads to Forester for his outreach spot. When he talks with her in the phone, she calmly agrees to meet with him. Dev meets Gerrard, Zillo, and Carson for a workout at the stadium. Dev tries to ask Gerrard about his second family but the coyote shuts him out. Dev then turns to Fisher for advice about the future. Fisher tells him that it’s not easy staying loyal, but it's possible. While there, Dev also manages to convince Fisher to reach out for help when he brings up his kids.

After placing a bid on a house, Dev and Lee head up to Lake Henderson for the inevitable conversation with Gregory. The boys go to Dev’s parents house for breakfast. When the court case is quickly brought up, Gregory tells them he was just taking a job. But when asked how he felt, he hinted that he disapproved of Dev’s “lifestyle". Dev kisses Lee in front of Gregory and gives him the money for Alexi. But Gregory shreds the check in anger, believing it to be a bribe attempt, and storm off. Dev and Lee leave for Forester University, which has changed in the last couple years. Lee heads off with Brenly to meet Eileen, promising to return to campus later that night. Hal calls Dev about Fisher, and through a series of phone calls, discovers that it was Damian who urged Fisher to use the illegal serum that caused his downward spiral. Lee and Brenly have dinner with Eileen, where she tells them about her new boyfriend and his daughter. When they go to collect their things, Lee decides to leave a few things from his childhood behind for his mother's sake. After they leave, Lee realizes that he didn't fight with Eileen and can change when needed. Dev gives a short speech at the FLAG meeting and answers a few questions. He then goes out to the campus cafe with Lee and some of his old friends; Allen, Misha, Salim, along with Parlon, Misha’s husband, and Chuck. They catch up on each other’s lives. Lee plays a voicemail from Brian saying he will leave him alone for good. When Dev and Lee return to their hotel, Lee confesses that he’s worried his action will tear them apart. Lee then proceeds to propose to Dev. But Dev tells him that they should wait until his football career peaks before getting married. While discussing the future, Lee tells Dev that over time, the decisions they make will shape who they will be a few years down the line. They get an email saying they officially bought the house in Yerba.

Months later, Dev is training with some new teammates after a few trades. As Lee gives an encouraging kiss during practice, Dev realizes that life is all about being with the people surrounding you, ready to face whatever it is life throws at you.

Wiley "Lee" Farrell- A gay red fox who tries to work out his relationship with Dev his boyfriend. Brenly and Eileen's son.

Fisher Kingston- A tiger who plays in the defensive end for the Firebirds. Confirmed using drugs to help heal from his concussions.

Damian- Fisher's agent whom Dev hires after firing Ogleby. Turned out to be the one supplying Fisher with the illegal serum.

Gregory Miski- Dev's brother who is a lawyer. He defended Families United in their court case; doesn't believe in gay relationships. Main antagonist of the book.

Eileen Farrell- Lee's mother and Brenly's ex-wife; was a part of Families United but left before the book began.

Ty Nakamura- a fox; wide receiver for the Firebirds. Ty reveals to have had a secret gay partner named Arch.

Gena Kingston- a tigress; Fisher's wife who tries to deal with Fisher's deterioration.

Polecki- A coyote who plays for the Sabretooths; comes out after the championship and becomes friends with Dev.

Gerrard Marvell- a coyote; played for the Firebirds; Secretly had a second family behind Angela's back.

Zillo- a coyote; backup linebacker for the Firebirds; tells Dev about Gerrard's affair.

Brian Dallas- a skunk, former friend of Lee's who has a vendetta against jocks, especially Devlin. Was main antagonist of the series.

Obleby- a weasel; Dev's ex-agent whom he fires early in the book