From WikiFur, the furry encyclopedia.
Jump to: navigation, search
Culture > Publications > Novels > Out of Position 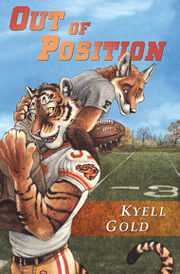 Out of Position is an anthropomorphic novel by Kyell Gold, published by Sofawolf Press and first released at Further Confusion 2009. The cover and interior illustrations are by Blotch.

Out of Position won the 2009 Ursa Major Award for Best Novel and its cover won Best Published Illustration. A sequel, Isolation Play, was released at Further Confusion 2011.

In April 2006, Devlin "Dev" Miski is a tiger and a cornerback on the football team for Forester University. One night, he is about to engage in a one-night stand with a vixen he picks up from a bar. As they are about to have sex, he discovers that the vixen is actually a male red fox by the name of Wiley "Lee" Farrel. Dev leaves but not before engaging in intercourse with the fox. He tries to continue a normal college life, but at the same time tries to track down Lee by watching the outside of his apartment building. When Lee comes home one night, Dev confronts him but instead of fighting him as expected, they kiss and proceed to have sex.

For the next few months, Dev and Lee secretly meet up to have sex, in which Dev explores the homosexual lifestyle. His teammates on the football team suspect he is seeing someone because of his lighter attitutde. Lee begins to assist Dev with his football technique during their sessions together to help Dev get drafted into a professional team.

In December 2006, Lee obtains an internship as a scouter for the Hilltown Dragons from a cougar named Morty. Lee tells his best friend, Salim, of his affairs with Dev. Salim warns Lee that his ex-best friend Brian, a skunk, will want to know about it. Lee hesitates because of an incident in which Brian became intoxicated and tried to flirt with members of the football team, which in turn, resulted in Brian being put in the hospital after a beating. Even though said football players were thrown off the team, Brian maintains a fixed point of view regarding football players in a negative way and hopes to one day expose a player a homosexual. After accompanying Dev to a football combine, Brian shows up to Lee's apartment after hearing about Lee dating someone on the Forrester football team. Brian tries to threaten Dev but the tiger reassures Brian that Lee is in good paws.

Lee's parents, Brenly and Eileen Farrell are wondering about their son's efforts of his schoolwork and his social life. Especially after Brian repeatedly calls their home phone. Lee tries to juggle his schoolwork and his internship with the Dragons but finds the conflicting schedule hard to manage. Knowing he must drop one of them, Lee tells his parents about the internship and the once of a lifetime opportunity to be working with football. Brenly doesn't like the internship because it doesn't pay any money and warns Lee that if he drops school, he will stick his son with the $100,000 student loan problem. Despite his instincts saying otherwise, Lee drops the class needed to earn his degree to focus completely on scouting. After telling Dev of the money situation, the tiger promises that if he is drafted, he will pay off his loans. On the day before graduation, Brenly and Eileen fly to Forrester University to see Lee get his degree. However, during a dinner that night, Lee confesses that he dropped his Literature class and will not be graduating. Brenly is furious. But at the same time, Dev surprises the family and introduces himself as Lee's boyfriend. After a heartfelt talk with Brenly, Dev convinces him to at least talk things out with Lee.

Nineteen months later, Dev is in professional football and has just been traded to the Chevali Firebirds, coached by Samuelson (a wolf), with new teammates: Charm (a stallion), Fisher (tiger), Gerrard (a coyote), Colin (a fox), Ty (a fox), Carson (leopard), and Corey "Killer" Mitchell (a cougar). Dev chooses to trade positions to backing up for Killer's position. Dev introduces Lee, who is dressed as a female to keep their homosexuality a secret, to Fisher. But when Lee gets spotted by some of the other Firebirds by the locker rooms and is exposed as a male, Fisher confronts Dev about his relationship with the fox. They fight, after which Dev worries he'll be penalized, but isn't when Fisher says that it's Dev's private life and should be allowed to do what he wants. Dev's agent, Ogleby (a weasel), sets Dev up with actress Caroll Chavon (a panther) in order to give both of them more publicity. Caroll wins over the approval of Dev's teammates (especially Charm). While leaving a team dinner with Caroll, Brian appears and takes a photo of Dev and Caroll, threatening to tell Lee about their affair which Dev did not warn Lee about. However, Lee tells Dev that it is okay and that he knows it's all fake.

All seems to be going well until Ogleby tries to set up an engagement between Dev and Caroll, Lee begins acting distant, and Dev worries that he will never get the starting position on the team because of Killer's newfound motivation (which involved Gerrard telling Killer about Dev trying to take his position). However, due to blind ambition, during a football game, Killer is impaled with a stag's antlers and it sent to the hospital. Dev immediately assumes the position of starter and helps the Firebirds win the game. Dev is also shocked when, after the game, Lee shows up in the locker room dressed normally. Their heart-filled reunion is cut short when Fisher catches Brian outside the locker room filming Dev and Lee. Lee takes the tape from Brian's camera before telling Fisher to let him go. Even without the video proof, Brian writes a blog outing Dev as a homosexual. Ogleby releases a press statement, claiming that Brian is lying to get attention. The resulting press coverage soon sky rockets, which causes some of Dev's teammates to avoid him. Fisher and Caroll urge Dev to deny the allegations. When Brian publishes another article claiming Dev offered him oral sex, Dev officially comes out to his teammates. Later, Lee admits that he gave Brian a hand-job in hopes of getting him to not post anything about Dev. Dev realizes that Lee is missing the activism days of college.

The next day, the Firebirds face off against another team in Aventira. However, Dev is greeted by a poor crowd holding up signs calling him a "faggot". The Firebirds' opponents even shout homophobic slurs during the game. During the first half, Dev cannot focus because of all of the hate surrounding him. But after a few encouraging texts from Lee, Dev brushes off the comments and goes on to win the game for the Firebirds. Brian attempts to force Dev to come out during the post-game press conference but is escorted outside. Dev finds Lee outside of his apartment where the two make up and have sex. Lee encourages Dev to go to another conference set up by Ogleby with the intent to deny all the rumors about Dev being gay. At the conference, after seeing Lee dressed up in drag and realizing he should not be afraid of who he really is, Dev confirms the rumors about being gay to the press with most of his teammates showing up to throw him their support. When asked when Dev first knew he was gay, he responds, "Funny thing, it started with a girl."