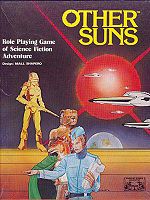 Of particular note the skiltaire species created by Mark Merlino, originally as a mascot for the Orange County Science Fiction Club, was used with permission as a playable species in the game. The characters' use in the game is significant because many furries over the years have played the species not only in Other Suns but as their fursonas or alts.

Physically, the game was a boxed set containing two softbound booklets, a set of dice and some reference cards. Book 1, Characters and Skills was 72 pages long. Book 2, "Starships & World Building" was 64 pages. The box cover was illustrated by Robert R. Charrette, and the booklets were illustrated by Fa Shimbo and Ken Sample.

A 48-page book Alderson Yards Shipbook (FGU 2202) was published as a supplement in 1984. It contained "over 15" spaceship designs for use with the game and was written by Niall Shapero and illustrated by Steven S. Crompton.