Orthan is a roleplayer, and artist who lives in Arizona, USA with two cats. His fursona is a caracal/cougar hybrid. As a roleplayer, he is most often seen on Tapestries and FurryMUCK. As an artist, his main haunt is Fur Affinity. Orthan's artwork is mainly adult-themed. 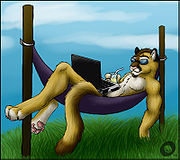 Orthan as drawn by himself

Orthan (full name Orthan Phyle) is an anthropomorphic caracal/cougar standing at around 7'6" in height with an athletic build. He bears typical coloring for a cougar (tawny with distinct black and white facial markings) with the slight deviation of a dark-brown dorsal stripe that runs from the bridge of his nose to the brown tip of his tail. A strip of fur atop his head is slightly longer than the fur surrounding it, giving him a faux-mohawk of sorts. He also has a tuft of brown hair on his chin. His eyes are blue. His age is estimated to be the equivalent of a man in his mid-to-late 20s.

He is a very laid-back individual who can appear aloof at times, but enjoys meeting others and is generally affectionate once he comes to know another furry. He is bisexual with a slight bias towards females, and (as is usual for his natural species) polyamorous.

Outside the realm of play, Orthan is a 22-year-old pansexual man who lives in Arizona with his two cats. He enjoys Middle-Eastern culture (especially music and food), drawing, and roleplaying (which he does exclusively on MUCKs and MUSHes).