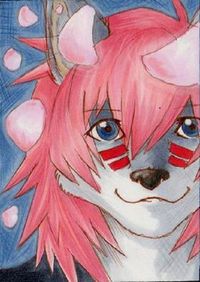 Andante "Oracle" Sage[1] (born October 1)[2] is a fursuiter who lives in York, North Yorkshire, England. His fursona is a pink-haired grey wolf.

Oracle is a member of the NorthernFurs. He joined the furry fandom in 2007 after playing a Lupin Shaman in a long running game of Dungeons & Dragons. He was labeled a furry by his fellow gamers without his knowing anything about the fandom, but eventually grew curious and joined the UKFurs soon after.

Oracle attended his first furmeet in August, 2007, in York. He joined the Newcastle Meet in December, 2007, which he regularly attended until late 2012. As of April, 2014, Oracle attends local furmeets in York, and often runs the fursuit walk. He also regularly attends the Leeds meet and helps run their Fur Affinity page.[3]

Oracle draws and takes photographs, and he has taken photos of fursuits across the North of England. His work has appeared on several furry blogs and websites, and has been used for fursuit IDs at the ConFuzzled convention. Oracle's first con was ConFuzzled 2012, and he returned the following year.

Oracle's fursuit is a purple cat called Jorrick Speakenglish, who is upperclass and somewhat bad-tempered. Jorrick was made by Miku Plantman, and its first outing was at the Manchester Meet in 2013.