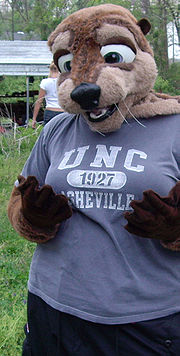 Oontz is an otter character/fursuit owned by Banrai. LillyOtter originally made the fursuit, and Banrai purchased it from her in March of 2005.

Oontz, as one might tell from her name, loves techno music, and could be defined as a 'raver'.

In the fantasy world of Astian, Oontz is a minor character. She lived next-door to Tias and Crimnos before the wars started, and took refuge with them when they went into hiding. During the purge she was hidden in their house and was, on several occasions, almost captured and taken to the labor camps which would have certainly been her end. As it stands now she is simply an aide to Tias, working by her side to help heal their broken world.