From WikiFur, the furry encyclopedia.
(Redirected from Only in Kenya)
Jump to: navigation, search
Culture > Animation > Animations > Kenya 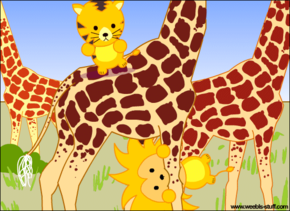 Lions and tigers, only in Kenya

Kenya is a widely-known Flash animation, another in the vein of Badger Badger Badger. It is the work of Jonti Picking and friends.

The content, such as it is, is simply a collection of lyrics and accompanying illustrations supposed to have some connection to the African nation of Kenya . . . with a couple of jabs at Norway for no apparent reason. It is probably safe to say that this, like most everything else found on the weebls-stuff website, is strictly intended to make the viewer grin and chuckle.

The particular stylization applied to the dancing lion and tiger was so well received that a number of furry LiveJournal users subsequently had their own characters adapted to that same style for use in custom icons.

There was also a live-action version of Kenya featuring people recreating the original animation script with fursuits and simple props.

Did you know? Kenya isn't actually a natural habitat of the tiger, which comes from Asia (though, according to some sources, more tigers live in North America in captivity than in Asia in the wild).