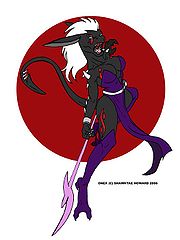 Onex is a character in Extinctioners.

Onex is a Remalon of the race called the Chaosbringers. All Remalon races have powers or abilities unique to their specific race. Her race gained its name because they have the ability to cancel the abilities of any other Remalon when in close proximity to them. It is believe this ability is done through chemical scents.

Onex is the last known Chaosbringer. As such, she has a lust for revenge and attempts any means necessary at personal survival and gain.