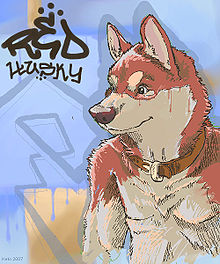 Oekaki (お絵描き) is a Japanese term to describe the act of doodling, especially computer "doodles" and/or "scribbles," and a kind of imageboard system that revolves around creating such style of computer art.

Oekaki as an art style[edit]

A major draw in oekaki art is its pixellated look, often using thick, colored outlines and basic use of basic rendering tools, as opposed to other forms of computer-rendered artwork.

Because of this, many pictures that resemble the oekaki style are considered "oekaki", even if they were not produced on an oekaki bulletin board.

An Oekaki image board allows any contributor to create art on it using a Java applet on their computers. Two of better known systems are called OekakiBBS and PaintBBS. These systems have become more and more sophisticated over time, allowing the quality of the pictures on the boards to increase.

The board system allows users to browse, rate, and comment about posted art. Sometimes, the software will also include a replay option.

Oekaki chat, or paint chat, is a type of online drawing application and service that has similar drawing functionality with an Oekaki image board, but where users can talk to each other and draw collaboratively.