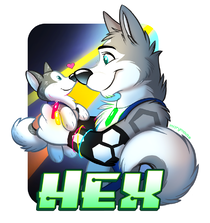 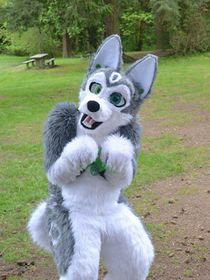 Hex Husky in the park; suit by Ognas

Hex Husky is a network engineer and fursuiter born October 11, 1983 in Portland, Oregon, U.S.A. He lived for a time in Gresham, Oregon, but as of 2015 he resides in Lynnwood, Washington. Prior to March 2014, he was known as Odious (or Odi). He has an associates in Computer Science Application Engineering with electives in arts and audio engineering.

Hex's character is a grey-and-white husky with white and grey hexagon-dapple markings, who enjoy raves. He is sometimes seen with a harness and dances with glow-poi.

While not a shapeshifter, Hex developed several different fursonas; as of 2006, he considered himself to be primarily an otter, but over time he became more interested in wolves and huskies. His characters have historically worn tribal attire, consisting of a pair of painted feathers worn behind the ear, a claw and crystal necklace, a gold braided armband on the right arm, and a red logo band on either tail or left leg. They may also wear bodypaints, bracelets, anklets, or leather belts and pouches.