Odin Sphere is a fantasy action RPG video game developed by Vanillaware and localized and published by Atlus for the PlayStation 2 in 2007.

Ragnanival, the realm of the Demon Lord Odin, has invaded the forested realm of Ringford, home of Elfaria and her fairy subjects. Odin seeks the Crystallization Cauldron, which can create powerful Psypher crystals.

The battleground for this war is a blasted wasteland between the two countries. This wasteland was once the prosperous nation of Valentine. All that remains of the devastated land of Valentine now are the Pookas, cursed humans in the shape of anthropomorphic rabbits, their currency, and the magically-endowed grandchildren of the late King Valentine. 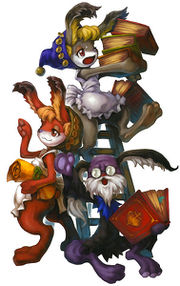 The Pooka Race in Odin Sphere