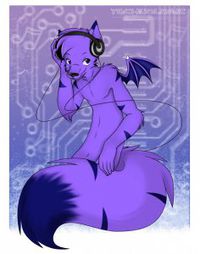 Ocean is a Canadian furry. Originally from Saskatchewan, as of January 2012, he resides in Calgary, Alberta. He has also resided in Edmonton, Alberta and Waterloo, Ontario. He is a purple tigrox: part tiger, part fox, and on occasion has dragon wings of various size. A lover of EDM, he is rarely pictured without his large headphones.

Ocean has been an active member in both the Alberta Furs and the KW Fur group. Between July 11, 2009 and Sept 1, 2014 he was a moderator for the Alberta Furries website.

After moving to Calgary, Ocean met up with writers Voice and Roland Jovaik, and rekindled his love of writing. Since then, he has become an active member of the furry writing community and has been publishing stories in various anthologies. He is also one of the founders, co-hosts and lead editor of the Fangs and Fonts writing podcast.