OMGWTF! Furries! is an independent, no-budget mockumentary produced by Umgotts Studios, starring furries Kemeeleon, Amadeus, Lunamor, and Mitsu, as well as a handful of other furs and their friends. This short film, which runs about 25 minutes in length, premiered at FurFright 2005 to a packed house two nights in a row and was initially released on a simple DVD at that con.[citation needed]

It is set up as a mock documentary about the furry fandom, interviewing guests as knowledgeable about it as one could be if one's sole exposure to it was MTV's Sex2K, Vanity Fair, CSI, and the tail one found in her son's room next to a well-read copy of Jim Hardiman's Skunkworks. One of the segments involves a television ad for a Spanish language furry convention, and lampoons fandom celebrities Uncle Kage and 2, The Ranting Gryphon.

Dos, El Griffion Rantioso is a fictional character appearing in Umgotts Studios's independent film, OMGWTF! Furries. He appears in a commercial segment for the fictional La Convencion De Las Animalias, alongside the equally fictional Tio Koggey, where he enumerates a list of everything he does not like.

The character of Dos is played by Amadeus.

Among the things Dos does not like are "babies," "Catholics," and "the President." He does, however, state that he likes Tio Koggey.

The character's name is a word play on 2, The Ranting Gryphon, as well as 'Deus, shortened name of Amadeus, the actor portraying him. 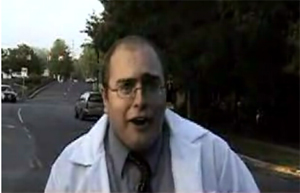 A minor character in OMGWTF! Furries, from preview screenings and trailers it is apparent that Tio Koggey plays a major role in its sequel, The Wrath of Con.

Tio Koggey, Hombre de Asiento first appeared in the La Convencion de las Animalias advertisement alongside Dos, El Griffion Rantioso in OMGWTF! Furries. According to the translated dialogue, he is the "man of chair of AnimalCon," "likes to talk a lot," "only drinks tequilla bought by others," and is a "crazy scientist." In the final scene of the film, he is inexplicably attacked by Silvermoon Lonewolf Whitestar but stands victorious, telling someone off-camera to "put him in with the others."

Who the others are or that which into Silvermoon is put are two subjects that are never elaborated upon.

In the trailer, Tio Koggey appears to once again be locked in mortal combat with Silvermoon. He is also seen riding a Razor scooter and giving advice, describing the furry fandom as "a pathway into many abilities some would consider to be unnatural."

The special effects test released shows Silvermoon confronting Tio Koggey with some kind of laser sword. The AnimalCon chairman corrects the lycanthrope's grammar nonetheless, showing the character has both a mastery of the English language and a lack of fear.

The character is an obvious parody of Uncle Kage, chairman of Anthrocon, who, while never speaking openly against OMGWTF! Furries, has expressed mild displeasure with it on several occasions[1].