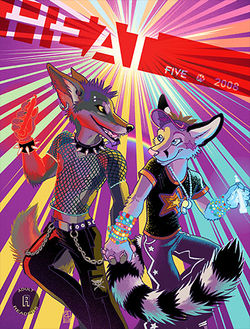 Cover to Heat #5, by oCeLoT

Portions of her childhood are depicted in an August 2014 graphical autobiography by her sister, Raina Telgemeier.[3][4]

oCe has been active in the furry fandom since at least January 1998.[5] she spent five years as a champion of Further Confusion's Iron Artist competition; she won her Iron Artist Spotty title from Jim Groat in 2002 and handed it over to Iron Artist Control Point (Egypt Urnash) for the 2007 contest.

oCe has contributed to The Bestiary, The Disqualified Portfolio, Wild Cats of the World, Heat and X. She was a paid member and compagnon at ArtSpots[6] and also maintained the YiffNet Visual Directory.

oCe's fursona is an ocelot with cream/beige/rust/black fur and radioactive lime eyes.[7][2] She also has an illuminated phoenix costume.[8]