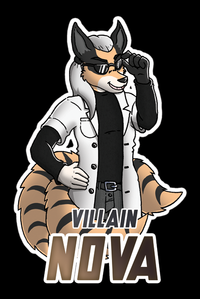 Nova Dimitryi Halvern, also known as n0va, k9pilot, k9pilot85, and Nova Dingo (born December 17),[1] is a furry who was born and raised in Ingham in North Queensland, Australia.[1] He is an occasional writer of "strange stories with unbearable amounts of romance".

Nova's fursona is a black dingo with kitsune heritage. He is usually hidden behind his darkened glasses, his three tails only wagging at the rarest of times. With an Australian upbringing, a Russian name, and a fluency in French vocals, this hybrid is a paradox wrapped in a enigma with tails.

Having been in the furry fandom since around 2000, Nova's roots actually lie within the anthro Pokemon community. After finding his furry side, he spent many years on Furcadia but later moved away from the social aspect, remaining in the shadows collecting many pieces of canine artwork.

Nova's first furry convention was MiDFur 12 in 2010, where he worked as a volunteer. Intending to take two eight-hour shifts, he ended up covering three days days from 9AM to past midnight, handling Con Logistics and marshalling fursuiters.

The most expensive item in MiDFur 12's charity auction (and to date the most expensive non-legacy piece sold) was won by Nova. $A670 was donated to the Lost Dogs Home for Caroo's “Villans of MidFur X11” colour original.