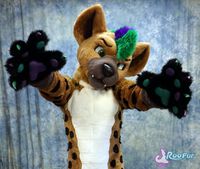 Nos Hyena is an Australian fursuiter, musician, and YouTuber.

Nos’ fursona is a spotted hyena with a green and purple mohawk. Nos also used to own a fursona/fursuit called Booga.

Nos owns a YouTube channel with 100,000 subscribers as of July 2020.[1] He has been making videos on the channel since March 7, 2017. His content usually consists of random skits, music videos, convention-related videos, advice videos, and other stuff of that nature.

Nos also creates parodies of popular songs including a parody on TLC's No Scrubs entitled "Fursuit Snugs" [2] and a parody of Lil Pumps' Gucci Gang entitled "Furry Gang".[3] He also makes original songs like Grinding For That Fursuit (Money).[4]