Kenoa playing in the snow. 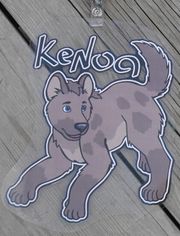 RedHyena is a fursuiter who lives in Pendleton, Oregon, U.S.A.[1] His fursona Kenoa is a North American Red Hyena.

RedHyena made his first convention appearance at All Fur Fun 2009, and he was the Fursuit Guest of Honor at RainFurrest 2015.[2]

The North American Red Hyena is a fictitious hyena species based on now extinct real world hyenas that had similar characteristics. The species was originally created in 1999 for a set of short stories as part of a school project by "RedHyena". A name the creator used after discovering the fandom a few years later.

Description: Red Hyenas are well suited to cool, wet climates like the Pacific Northwest, with a complex social structure similar to spotted hyenas in Africa. They are very intelligent, capable of complex communication and problem solving at a level that only humans can match. Red Hyenas are notable for their desire to understand the environment around them. This natural curiosity has led to the development of advanced skills; Red Hyenas are the first known species to control fire for their own use, they also manipulate and develop numerous other skills including advanced alchemy. They practice a universal respect for other forms of life and try to take only what they need to survive from their environments.

Physical characteristics: Most obvious difference it the fifth toe on each paw. Their bodies are sleek, muscular, and evenly built with both forelimbs and hind limbs about the same height. Their fur is usually cinnamon red hence their common name. Height at shoulder averages: 1.24m ( about 4ft ) Average healthy weight: 240 kg ( 529Lb ) Running speed: about: 50 km/h ( 31mph )

Lifespan and breeding: They tend to live around 218 years. Cubs are considered adults at 25 years. The vast majority of litters include only 1-2 cubs which are raised by the whole clan in a team effort.

Source information based on information from RedHyena's furaffinity.net journal and redhyena.net. They are used with permission.